Continuing our Archaeologists Working from Home series, we caught up with Chris Judge, the Assistant Director at the Usc-Lancaster Native American Studies Center. (photo from recent ASSC conference) 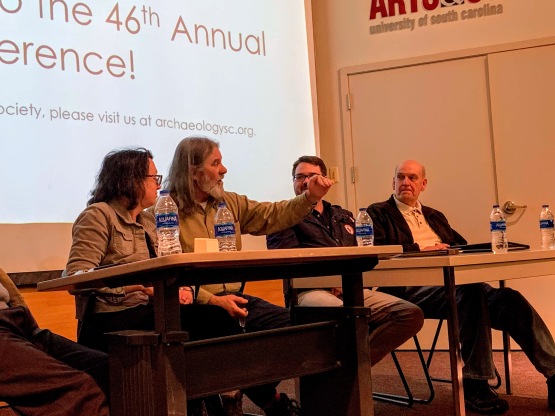 Following the USC Spring Break, the decision was made to work remotely and move all of our classes to an online delivery format. We were asked to return to our offices briefly to retrieve needed items and were given one week to prepare during which faculty and students were alerted to the process. At first this formidable endeavor seemed unobtainable. As luck would have it, I have been teaching using Power Point illustrated lectures for years, all of which were already online and available to my students through a device called BlackBoard. This is a virtual learning environment and management system tool. For once Judge the Luddite, had an advantage. Felt rather sorry for colleagues who teach things such as Chemistry labs or studio art!

I taught my four classes using a Zoom- like tool known as BlackBoard Collaborate Ultra. The drawbacks include technical and Internet access issues, not all students have Wi-Fi, laptops, and smart phones. A number of my students ended up taking jobs that precluded them from being in class online. Sometimes the variation of internet speed kicked students out of the session and once even the Professor. One morning I lectured unknowingly for 45 minutes without anyone in the audience, actually they were there and I was socially and academically distant! Occasionally a lecture had to be repeated, an AWOL student needed to be tracked down by our Admissions Office, and a make-up test or two hastily composed. But I think we all survived largely unscathed. Time will tell. I look forward to returning to live classes.

Saving approximately 12 hours a week in commute time (will I ever want to go back?), I have been rather productive on the research and reporting front. I submitted a grant proposal answering a competitive call for “creative and cost effective” plans for long term monitoring of erosion at a site in South Carolina and was the successful candidate. The award also came with a bonus $10,000 to be used for my own research purposes. Full disclosure, I was the only candidate!

In 2019, I was the recipient of generous funding from the USCL Campus Dean to obtain four radiocarbon dates from organic materials recovered from archaeological features at the Johannes Kolb site, located on the Great Pee Dee River in Darlington County, South Carolina. This was a test of a model I developed for the decline in basal width of Triangular Arrow Points. A report is due this month, so I had time to do a little more in-depth research. These C-14 dates targeted three features, two of which had Triangular Arrow Points and one of which had a Stemmed Woodland Arrow Point. The dates are all between A.D. 800 and A.D. 900, squarely within the Late Woodland. One feature (04-25) had three Triangular Arrow Points averaging 17.56mm that conformed to the model I developed for the decline in the basal width of this point type while three Triangular Arrow Points in a Late Woodland feature (06-37) fall within the later Mississippian/Other Late Prehistoric range at 14.73 mm. Oh well, that is why we do science.

Once grades were submitted I drafted a Re-Open Plan for the Native American Studies Center to help guide us when we return to normal operating hours on August 1st. The procedures and protocols change daily and I imagine the plan will evolve significantly over the summer. We will be meeting in various teams for the USC Lancaster campus over the summer to address a return to the new normal.

At home, I have been conducting a botanical and faunal photographic survey of my 6/10ths of an acre urban parcel. Plus long deferred yard work is nearing completion, the garden never looked better, and I might even be a candidate for honorable mention for yard of the month for the first time ever. Nah!